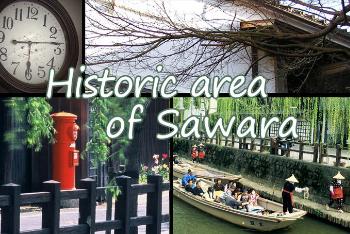 During the Edo period (1603-1867), Sawara flourished with its water transportation business, delivering goods from all over northeastern Japan to the megacity of Edo (present-day Tokyo).

At Sawara’s Historical District, many buildings and facilities from this era of prosperity remain, reminding us of Sawara’s former wealth and success. Moreover, many businesses operating in this district today have been passed down for generations since the Edo period.

In 1996, Sawara’s Historical District became the first district in the Kanto region to be nationally designated as an Important Preservation District for Groups of Traditional Buildings.

Inoh Tadataka, famous for drawing the first complete and incredibly accurate map of Japan, spent over 30 years of his life living and carrying out the family business here. This former residence currently consists of a shop, a main gate, a kitchen, a study room, and a storehouse made with earthen walls. It is said that Tadataka designed the layout of the main building himself in 1793.

At the age of 17, Inoh Tadataka married into the Inoh family. He devoted himself to the family’s sake brewery business and his duty as the village headman, and under his leadership, the family business and Sawara alike prospered greatly.

After retiring at the age of 50, Inoh Tadataka studied astronomy and geography, and created the Complete Map of All of Japan’s Land and Shores using scientific methods, for which he is widely well-known for. He is the pride of Sawara. 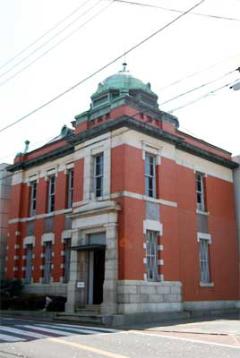 The building was donated to Katori City and now operates as a gallery. Inside is an atrium, with a corridor on the second floor. The roof is a wooden frame covered by copper shingles and on the front corner of the building is a dome. 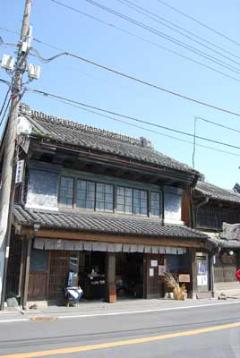 An old business that was established in 1804.

The front and side walls of the building are thick and made from mud. Behind the shop is a courtyard with a well from which you can try drawing water. There is also a storehouse and a traditional toilet, both of which have been designated as Cultural Properties.

This building is an archetypal merchant home in Sawara and is often used in movie and drama shootings. Its magnificent facade reminds us of Sawara’s prosperity at the time.

It is the first building of the Sawara Neighborhood Museum. Tools and clothes used and worn in daily life back then are displayed. 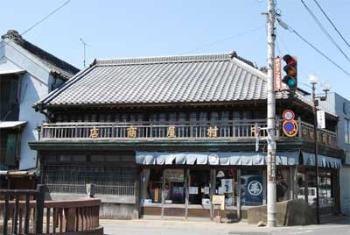 Nakamura-ya has been selling dried goods, sundries, and tatami mats for generations since 1874. The shop and the kitchen are on the first floor and the tatami room is on the second floor. Because this building is located on an abnormally-shaped corner lot, the architecture was adjusted to accommodate this.

For example, the corner pillar facing the street intersection is pentagon-shaped and the interior framework and layout of the building is unusual.

As part of the Sawara Neighborhood Museum, this building displays conjoined cranes made from one sheet of paper. 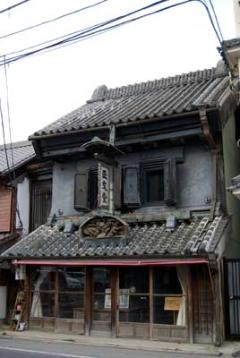 Originally a bookstore, this massive building was built in the style of a storehouse in 1880.

The center pillar of the building is made from Japanese zelkova, the windows on the second floor consists of three layers for fire proofing: a hinged door, an earthen door, and a wooden door, and the store’s sign is of a rising dragon and a descending dragon that have been arranged to form the Japanese characters for Shōbundō. 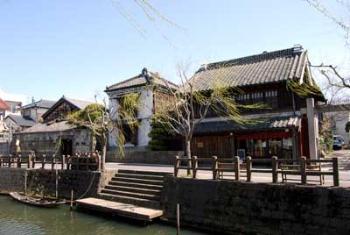 Shōjō is a soy sauce factory that has been in operation since May 1800. After WWII, its main business shifted to producing and selling preserved foods boiled in soy.

The shop is one of the few buildings remaining that still maintains its appearance as a traditional shop that was commonly seen during the Edo period (1603-1868).

It uses a slated shutter system, a system used during the Edo period to lock windows and doors, and at the back of the shop is an elegant paper sliding door with lattices of evenly spaced vertical wooden bars. The storehouse was built in the early Meiji period (1868-1912).

As part of the Sawara Neighborhood Museum, this shop displays photos from movies and dramas.

A buckwheat-noodle shop that was established in 1782.

This two-story wooden building consists of a shop, a kitchen, and a storehouse, all of which are connected together in Meiji period (1868-1912) fashion.

In the storehouse, various tools and a book of secret buckwheat-noodle-making techniques remain.

The roof of the shop is a gable roof made of tiles. In 1902, a glass sliding door was installed at the front of the store, making it the first glass door used in Sawara. This door is a valuable Cultural Property. 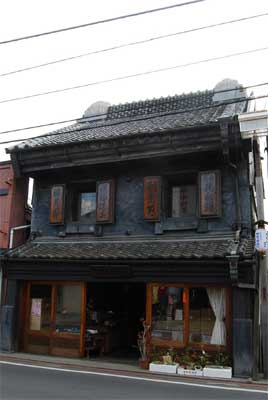 The shop was constructed right after the large fire in Sawara. As a result, it was built using the most cutting edge fire-proof technology of the time and the walls were made to be about 45 cm thick. The building is 5.45 meters wide.

The first floor maintains the appearance of a store, with a tatami area and a dirt pathway. At the front of the store is a roll-up wooden shutter door. The second floor is a storehouse that serves as an attic.

The windows have double earthen doors that open from the center. The roof has six trusses connected by decorative beams.

The three-story book storehouse, made mostly from Japanese cypress, is located about 1.81 meters behind the shop.

The first and second floor was constructed in 1885. The third floor was rebuilt at the same time as the shop in 1892 and maintains the same structure as it had before the great fire of 1892.

In order to construct a storehouse-style building in such a small plot of land, the architects had to put consideration into the living space. For example, they turned the third floor of the book storehouse into the living area.

The building still maintains its original magnificent appearance and construction. 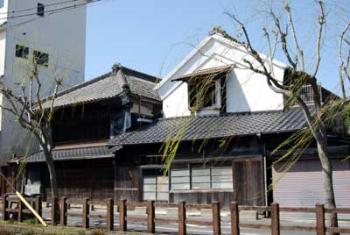 Kyū-abusō began operation in 1794, manufacturing vegetables pickled in sake lees. From the Meiji period (1868-1912) until the start of WWII, they exported their products to the United States of America.

They were also the first place in Sawara to sell Kirin Beer (during the Taisho period (1912-1926)). Their most popular product is “Chrysanthemum.”

The ridgepole is inscribed with “September 1789,” making it possibly the oldest storehouse in Sawara today. It was expanded in 1916 to 1917. The family assets from the Edo period (1603-1868) until 1955 are preserved here in these buildings.