Who is Inoh Tadataka? 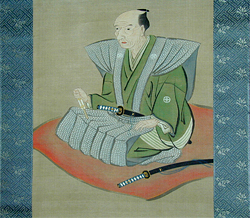 He was a surveyor and a cartographer known, particularly, for having completed the first map of Japan by conducting actual surveys in the 18th century.

He was born in

Yokoshibahikari（外部サイト） in Chiba Prefecture. At the age of 17, he married into the Inoh Family in Sawara Village and succeeded to the headship of the family. He was very active in public duties as the headman and the guardian of village officials, as well as in his family business.

At 50, he transferred the family headship to his son and retired from both business and public duties. He then left for Edo (present-day Tokyo) by naming himself “Kageyu.”
Between his 55th and 71st years (1800–1816), he led ten actual surveys, which covered all parts of Japan.

The maps he created based on those surveys received praise in Europe for their high levels of accuracy. In addition, his maps served as the basic geographic data even throughout and after the Meiji era (1868–1912). 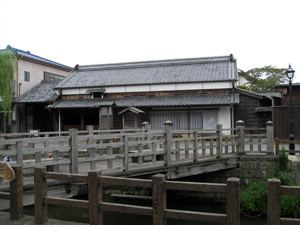 ▲ The Former Residence in Sawara

The Inoh Family had held the position of the village headman for generations and had been the dominant family.

The retail premises, front gate, study room, and storehouse in the former residence have been designated as National Historical Relic Sites since April 25, 1930.

In addition, a part of the agricultural canal made in the Edo period (1603–1868) remains within the former residence. Water from a built-in gutter of a bridge in front of the former residence gushed into the Onogawa River, making sounds similar to “jar-jar” (a Japanese onomatopoetic word for gushing water). Since then, the bridge has thus been called the Jar-Jar Bridge, where water is controlled to gush out every 30 minutes. 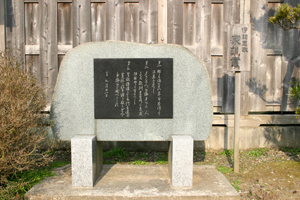 ▲The Monument of the Family Precepts

"First, never lie or do wrong to others, and stay honest to everybody. Demonstrate filial piety and obedience to your parents. Be loyal and sincere to your siblings.
Second, consider the opinions of not only your elders and betters, but also those of the younger ones and your inferiors and adopt the reasonable ideas.
Third, behave with cordial respect for others. Choose the modest language and never get in conflict with others."

With the inscription of repair work of 1821, this storehouse with thick mortar walls is the oldest in existence in Sawara. This structure adopted a mortar sliding door. However, this design was later on replaced with a double-door design.

The Monuments in Katori City 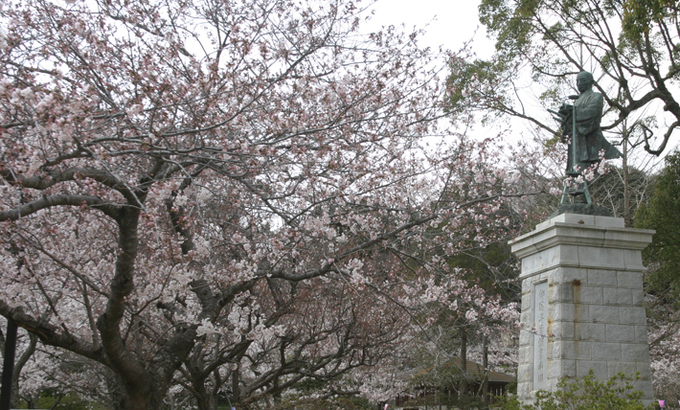 ▲The Bronze Statue in the Sawara Park

On a 5.5 m high base, the statue stands 3.3 m tall, depicting Inoh Tadataka surveying. The statue was created by Mr. Ujihiro Okuma, a pioneer of modern sculpture in Japan, and donated by volunteers in Sawara in 1919.

▲The Object of Quadrant

The Object of Quadrant is located behind the museum.