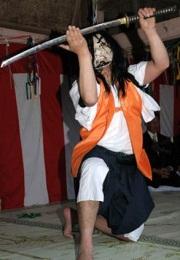 In 1804, volunteers and the village headman, who served as the head temple petitioner, held an eitai kagura (ancient Shinto music and dancing)festival, dedicating kagura tools and pots. This festival has been held annually on March 20th since 1807 to pray for peace, tranquility, prosperity, safety, and abundant harvest. During WWII, the festival was reduced to just a chigomai (a dance performed by children) performance, but since 1948, the festival has been entrusted to the young shrine parishioners’ association. In 1975, the Nissato Performing Arts Preservation Committee was formed and has continued to pass down the Shirakawa-style 12 kagura performances since then.

Before the kagura performances, a Shinto ritual in which a shaman or priest soaks bamboo grass in boiling water and sprinkles the water on worshippers takes place.