In 1825 (8th year of Bunsei), traditional and authentic Sake manufacturing skill was handed down from the Ino family. In the Sake brweery, we display old-fashioned tools for Sake manufacturing.
You could learn how to make sake at that period.
We also offer you free tasting of our Sake.

After the death of INOH Tadataka，his friend KUBOKI Chikuso，a Confucian scholar in the middle Edo period，gave a great help in completing the perfect map of Japan.The 6th successor to Chikuso，KUBOKI Sumio was a good friend of our grandfather. Sumio's son，Gen, is a great contemporary painter and， now,in dose contact with our family.Some of those paintings by Gen will make you feel at ease.
In the 27th year of Meiji (1894)，the first shopkeeper，Hikota came up to Tokyo and opened his own store in umaya-bashi.He went through the hardships in a big Kanto earthquake and air raids during the Second world War，and he managed to protect his memorable belongings from letting them go.You can see these articles and old tools for trapping fish.

Our brewery was estabhshed in the years of Tenwa in Edo period(1681-1683).The founder came to Sawara from Yamato(Nara Prefecture now)and started his business as the maker of koji(malted rice)and then the fllctory developed into the manufacturer of seishu(refined sake),shochu(spirit from sweet potatoes)and mirin(sweet cooking sake),up to the present time. The chimney rising at the end of the precincts, 13 meters high,was built, in the 31st year of Meiji (1898),with bricks imported from Britain.
The(brewery warehouse)was constructed during the years of Tenpo(1830-1843),and the pathway in the courtyard are covered with nat hand-carved blocks of granite and Choshi stone (produced in Choshi).
And other old tools to make sake with,such as a big boat-shaped wooden bowl (used for extracting sake),tubs,casks and other old utensils are displayed.

You can see the only signboard of the mactch maker called"Dai Nippon Hyogo Sei-rin-sha(Kanematsu Nissan Norin now)"existing in Japan. A plump， red and ripe peach is impressively carved.
A wooden box in which to keep ice popcicles and actuany used around the twenties of Showa can be seen.
As proof of the dealer in the household goods， we have preserved a signboard of Shoji-gami(the paper for sliding doors)imported from Manila and old Noshi-gami(sheets of paper for the presenter's name， attached to the front side of the wrapped gift box).
We are waiting for anyone to come in to look at these articles.

Mr. Shibata Yusaku, a watercolor painter， a member of the board of examiners of Nitten(the Japan Fine Arts Exhibition), and a old acquaintance of the shopkeeper，painted watercolors for the wrapping paper, in which he vividly depicts the seasonal landscapes of Sawara. We also made them into a set of bookmarks.
An exquisite watercolor painting by Mr. Shibata Yusaku and some photographs with nostalgic scenes of our shop are displayed inside the shop.

museum of the furniture handed on within the family

Healthy life from your foot

We help you to find the shoes to fit you beautifully,with a suggestion that you should understand the importance of the combination of feet and shoes.
You must realize that it is most important to wear the shoes fittest for you.
Then we make a mold of your feet so that we can discover your one and only shoes out of a good stock of shoes different in size by 3 millimeters.

The museum of Senbon-koshi and Doma

Our brewery continued from the later Edo Era until the end of the Second World War,and now we do the business in warehousing.
The present shopfront was reconstructed in the early Meiji Era. The wide range of sliding doors of latticework called Senbon Koshi and the earth floor behind the doors sti11 1eavethe nostalgic atmosphere of the old days. The building across the street was used as the warehouse for storing the annual tribute rice until several years after the war. When you take another lane along the hillside, you can go down to the riverside along the long walls of the biggest warehouse existing in Japan(built in the 22nd Year of Meiji).
The combination of the lattice doors, earth floor and warehouses offers a good background for shooting TV movies and CM films. Recently this area around was selected as a shooting spot for a CM film starring a famous actress Ueto Aya.

The people in the south of Shimo-tsuke(Tochigi Prefecture now)have had a custom of making the dolls out of paper of their own making for a long time. There has been a religious faith that people can invite good luck by throwing into the river the dolls on a miniature boat which are burdened with every misfortune in place of human beings. From this customary event called Nagashi-Bina(drifting dolls)these paper dolls at the present time originated.
Every part of a doll， such as body, hair，ornaments and other small things， is elaborately made by hand with the paper called Shimotsuke-shibori-gami(the tie-dyed paper produced in Tochigi Prefecture).This tie-dyed paper is designated as a tangible cultural asset by Oyama City.

The tools in the old days

Living in the busy, restless world in which everything is evaluated just from work efficiency，we should try to have a certain interval of time to calmly listen to the sound of silence.
Direct a spotlight on the dusty tools no longer in use，and we can recall the efforts of our forefathers and see a glimmer of hope over the chaotic future.
We will be very happy if we can share time of such great relief with you.

elaborate model of the festival float 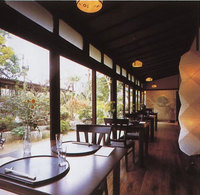