Katori city is in the northeast corner of Chiba prefecture and northern part of the city borders on Ibaraki Prefecture. To Katori city, it's 70km from Tokyo and 15km from Narita Airport, known as the sky-gateway of Japan.

The "Tone-gawa" River runs from west to east in the northern part of the city, wafting taste of Suigo and paddy fields spread out in its basin. Southern part is in Hokuso Plateau and flat land consists of mainly forests and fields.

Thanks to a mild climate and rich soil, Katori is famous for rice and provides metropolitan area with food. It's also known as a source of early rice from long ago.

In addition, there's water and greenness around the city and it is full of nature, history and culture. For example, pastoral landscape and Satoyama with those we associate a piece of beautiful scenery of old Japan, natural scenery around the Tone River and Inoh Tadataka's old house (one of a national historic spot), who is the first person completed surveyed map of Japan.

Beautiful waterside scenery, broad paddy fields, nature of Satoyama and the blue sky spreading out toward the future. We put them on a “K", initial letter of Katori city and expressed a bird flapping. 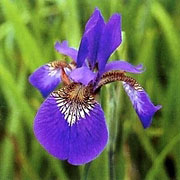 Iris is popular among citizens of Katori city, abundant in waterside, such as the Tone River, which is the main river, the Ono River, the Kurobe River and the Kuriyama River.

Suigo Sawara aquatic botanical garden has 1.600.000 of Irises is a tourist attraction which many tourists visit from all parts of Japan.

Accordingly them, Iris is designated for the city flower.

There are many places famous for cherries, such as Suwa Park, Joyama Park, Tachibana Fureai Park and Katori Jingu. Citizens of Katori commune with cherries and love them.

We selected cherry as the city tree because we hope to improve the image of the city more by planting yet more cherries from now onward. Reed Warbler is well known to citizens of Katori.
We call "Yoshikiri" in Japanese.

It's one of things of Suigo and has been theme for many poems and Haikus that the birds sang on merrily in the reed field.

It is also a suitable bird for a symbol of Katori City, which is the main one of Suigo in Japan, so it is designated as the city bird.